By collecting brochures and data from various manufacturers, a spreadsheet has been generated in order to perform a mathematical analysis that would compare the energy cost of drying grain for each candidate vendor to remove 5 and 10 points of moisture from corn. The main contributor to drying cost is the energy required to heat the amount of air each manufacturer delivers per bushel per second. Therefore, it is possible to compare each vendor on an equal footing using their air data, published bushel per hour throughput data, and holding capacity. For this analysis we have given some manufacturers an advantage if their system uses heat reclaim to recycle drying air back into the system in order to be more efficient. Even though Grain Handler builds a heat reclaim type dryer, we have not assumed so in this analysis. (See attached data sheet - Figure 6 - on the performance of a heat reclaim Grain Handler in St. Charles, Mn. If we impose the heat reclaim model for Grain Handler the analysis shows a drying cost per bushel that is close to that shown on the attached data sheet.) 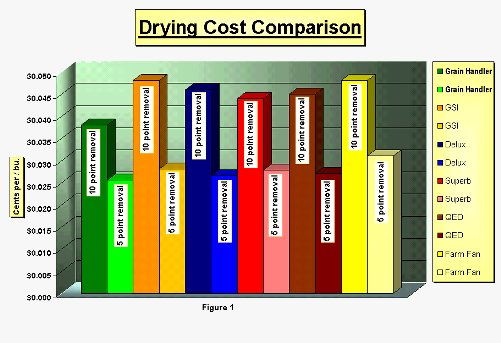 Figure 2 represents these same data in a different format. Here we display the difference between Grain Handler's cost of drying and all other candidates as a function of bushels dried. The abscissa (x-axis) of this graph represents the amount of bushels dried while the ordinate (y-axis) shows the dollars lost, in thousands, when using a competitor dryer. For example, if an elevator dries 500,000 bushels per year on average, then after four years of operation they have lost about $10,000 dollars if they were using the nearest competitor's equipment. This is just fuel energy cost. We have also shown that Grain Handler's electical energy costs are the least of all contenders. (The Figure 6 data sheet indicates electrical cost per bushel but this figure includes energy used by the bucket elevators and pit conveyor since separate metering was not available.)

Figure 3 compares the retention time of the dryers analyzed. Retention time is defined to be the amount of time that grain is in the dryer during the drying process. Based on manufacturer's published data, retention time was calculated by dividing the holding capacity by the bushel per hour throughput. Retention time is known to be a significant factor that says something about grain quality. Everyone is aware of the fact that bin dryers have a characteristic long retention time and produce high quality grain. This is because bin dryers come the closest to natural drying in that they deliver a relatively low amount of cfm air per bushel. Figure 3 shows that Grain Handler has the longest retention time of all contenders which corresponds with our low energy costs. Our customers have told us for some time that our long retention time leads to higher grain quality and test weight. When a dryer delivers less heat energy per bushel in the drying process, there is reduced kernel stress and loss of solid matter which maintains grain test weight.

Figure 4 shows the added value obtained in higher test weight by having low energy delivery and long retention time. Our customers claim that their Grain Handlers provide about 2 pounds test weight advantage over screen dryers. The chart shows the dollars gained in thousands as a function of bushels dried when test weight is maintained in the drying process. We have used the standard discount schedule published for the value lost when test weight is sacrificed. For example, if an elevator dries 500,000 bushels per year on average, then they can realize about a $40,000 dollar bonus in maintaining corn at 54 pound test weight versus 52 pound test weight over a four year period. It should be noted that all this information is consistent and the monetary advantage obtained with theGrain Handler accrues from our low energy delivery rate which leads to higher grain quality. The ability to produce grain with a higher test weight arid quality presents some interesting marketing strategies for an elevator. It might be cost effective to purchase less expensive lower quality grain and upgrade its market value by blending in high quality grain from a Grain Handler.

The Grain Handler Dryer is called a rack or duct type design and this is a significant factor which leads to its high energy efficiency and high grain quality reputation. In this type of dryer design the grain and air move generally in the same direction. This is referred to ,in the business, as a concurrent flow design. Figure 5 illustrates the grain-flow versus air flow pattern. It is obvious that the grain stream flows from top to bottom under the influence of gravity. Notice that the hot drying air gets into the grain mass at the top of every 2 foot tall tier section and flows with the grain, heating it up and removing moisture, until an exhaust duct is readied which is at the bottom of each tier section. A certain percentage of the drying air goes upward and to the left and right to exhaust ducts so some authors refer to this as a mixed flow type dryer.

Figure 5 illustrates that each grain column in the Grain Handler is a cavity which is "honeycombed" with ducts for delivery of hot air (top of tier section) and exhaust of moist air (bottom of tier section). It should be noted that the inlet ducts are open to the hot air plenum but are capped at the outside of the dryer. Alternately, the exhaust ducts are capped on their plenum end but open to the ambient environment in order to exhaust moisture laden air. This duct arrangement provides for the mixed air/grain flow pattern and also tumbles the grain continuously which contributes to even drying and no drying front like screen dryers.

Our energy efficiency derives from the fact that we have concurrent, counter-concurrent and cross air/grain flow patterns which allows for more complete heat energy transfer from the drying air to the grain mass than possible from simple cross flow type dryers (screen dryers). Our grain quality superiority derives from the constant tumbling of the grain and from our low energy delivery rate similar to natural drying.

A recent paper by Professor F. W. Bakker-Arkema and M.D. Montross of Michigan State University addresses the subject of grain quality as a function of the type of dryer air/grain flow pattern. The paper titled: "Moisture Content Variation and Grain Quality of Corn Dried in Different High Temperature Dryers" indicates that screen type dryers output grain that is about 50% higher on the stress-crack index (SCI) than grain from the rack or duct type dryers. The SCI is an Index or measuring stick which has been created as an indicator of grain quality. It is a weighted sum of the number of kernels in a batch that have single cracks, multiple cracks, or are checked. This article was presented at the American Society of Agricultural Engineers meeting in Atlanta in December, 1994. The data for this study was gathered at elevators in Michigan and Illinois in 1993 and 1994. We spoke with Prof Bakker-Arkenia not too long ago and he is very high on the rack or duct type dryer design because of their good energy efficiency and high grain quality attributes.

Another important advantage is that because of the solid sidewalls the Grain Handler can dry any type of grain, no matter how small, because there are no screens which allow small grains to fall through or lodge and under the air flow.

It should also be noted that the rack or duct type design is not something new. In fact, this design has been around for a long time but lost favor to screen type designs because of the extra expense with the solid side wall design. However, our dryers have a very long lifetime because of the galvanized G-90 sidewall construction (no screens to rust out) and have excellent resale value. Used Grain Handlers are difficult to find and when a customer decides to increase capacity, we never have a problem reselling their system.